Noise is an indispensable tool for creative coding. We use it to generate all kinds of organic effects like clouds, landscapes and contours. Or to move and distort objects with a more lifelike behaviour.

On the surface, noise appears to be simple to use but, there are so many layers to it. This post takes a deep dive into what noise is, its variants, how to use it on the web and its applications. And lot’s of examples. So many examples!

Imagine you want to move an object around the screen. Animators will use keyframes and tweens to describe the exact motion. Generative artists instead rely on algorithms.

Not exactly. Randomness is just too unnatural. Look at that pink ball, bouncing all over the place. It’s nauseating 🥴

What we need is a smoother, more organic randomness. That is what the noise function generates (the yellow ball). Much more aesthetically pleasing!

This idea of organic randomness appears again and again in creative coding. For example, when generating textures, moving objects or distorting them. We often reach for the noise function.

Generating noise on the web

There are two flavours of noise—Perlin and Simplex.

Ken Perlin developed the first while working on Tron in the early 1980s and won an Oscar 🏆 for those special effects. He then improved on it with Simplex noise and made it a bit faster. I’ll focus on the latter and use the simplex-noise library for my examples.

The noise function takes in a couple of inputs (which drive the output) and returns a value between -1 and 1. The output is a mix of Math.sin() and Math.random(). A random wave is how I would describe it.

The underlying mechanics are similar to how waves work. You can control how quickly or how much it oscillates by adjusting frequency and amplitude.

The noise algorithm can be implemented for multiple dimensions. Think of these as the number of inputs into the noise generator—two for 2D, three for 3D and so on.

Which dimension you pick depends on what variables you want to drive the generator with. Let’s look at a few examples.

💡 Starting here, each example is embedded in a source card. With links to the actual source code and, in some cases, variables you can tweak.

Technically there is no noise1D. You can get 1D noise by passing in zero as the second argument to simplex.noise2D. Let’s say you want to move a ball with an organic-looking oscillating motion. Increment its x coordinate and use it to generate the y value.

We can turn a flat 2D plane into hilly terrain by moving its vertices in the z-direction. Use the x and y coordinates to generate the z location.

And just like that, we have a terrain generator 🏔️

You’ve probably seen these distorted spheres in the wild. They are created by displacing the vertices of a sphere. Use the vertex coordinate (x, y, z) to generate the distortion amount. Then displace the vertex by it radially.

We can animate the distorted sphere by using 4D noise. The inputs will be the vertex coordinate (x, y, z) and time. This technique is used to create fireballs, amongst other things.

Now that we have the basics down let’s look at a few more applications of noise.

The noise output for a 2D grid, with (x,y) coordinates, looks something like this: 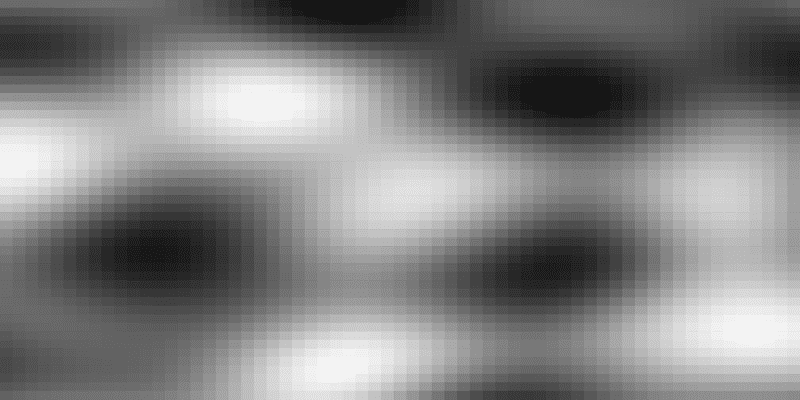 This is going to be our starting point.

We can use the Marching Squares algorithm to turn that 2D noise data into contours. Using Canavas, SVG, WebGL or whatever else you prefer. I recently used this technique with SVG to create generative profile cards. For a full tutorial on that, check out creating a generative image service 📸 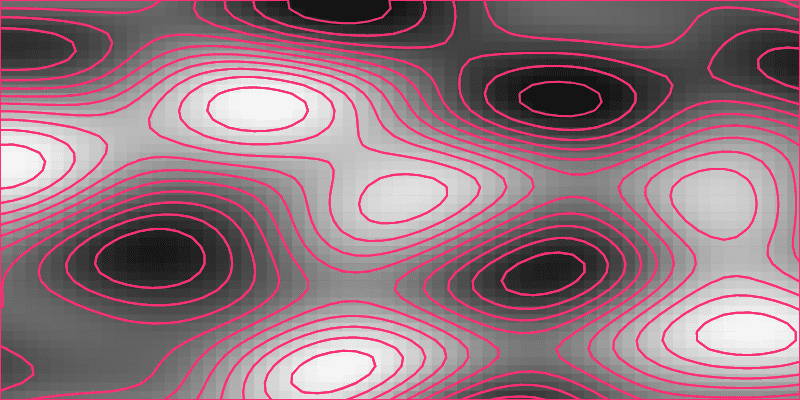 The cool thing about noise is that you can go up one dimension, layer in time and animate your image.

Honestly, this 2D grid of noise data is super utilitarian. It’s my go-to for all kinds of stuff. One of which is noise fields—a particular favourite of mine.

Let’s go back to that initial grayscale output. Map that to a more interesting colour scale, and you get plasma 🤩

Or, start with a grid of rectangles. Then turn it into a vector field by using noise to control the colour and angle of rotation.

Vector fields are cool, but flow fields are an even more exciting visualization. Here’s a plot I made last year.

Notice the path that the pen traces. Each one of those strokes is generated by dropping a particle onto the vector field. And then tracing its path. 💫

Alright, let’s break down this process.

Step 2, drop a bunch of particles onto the canvas. Their direction of movement is based on the underlying vector field. Take a step forward, get the new direction and repeat.

Step 3, track the location of the particle to trace its path.

Add in more particles and colour, and we get our flow field.

Speaking of particles, noise shows up in particle systems too. For effects like rain, snow or confetti, you’re looking to simulate a natural-looking motion. Imagine a confetti particle floating down to earth. The particles don’t move in straight lines. They float and wiggle due to air resistance. Noise is a really great tool for adding in that organic variability.

For a deeper dive, check my post on building a confetti cannon 🎉

Let’s circle all the way back to those animated blobs. Manipulating and animating 3D geometries is a lot more efficient with shaders. But shaders are a whole different world unto themselves. For starters, there is a special WebGL version of noise, glsl-noise. We’ll need to import that into our shader using glslify.

The animation above is quite similar to the contours we looked at earlier. It’s implemented as a fragment shader. Which means we run the same program for each pixel of the canvas.

Notice the pragma line? That’s us importing webgl-noise. Then use it to generate noise data for each pixel position vUv.

This part should look quite familiar by now.

Fragment shaders have this concept of distance functions used for drawing shapes. patternZebra is one such example that converts noise data into rings. Essentially it returns either 0 or 1. Which we then use to pick a colour using mix. And finally, use another distance function to clip a circular boundary.

Well, the amazing thing about shaders is that you can turn them into a material and apply it to more complex geometry.

We can take the same 2D mars shader from above. Convert it into a ThreeJS shader material. Then use the vertex position vPosition to generate noise instead of vUv.

This is honestly just a start. Shaders open up so many possibilities. Like the example below 👻

Not only is noise mapping to colours but, also alpha.

The idea behind vertex displacement is quite similar. Instead of a fragment shader, we write a vertex shader that transforms each vertex of the sphere. Again, applied using a shader material.

Oh, and throw on some matcap, and you’ve got some glossy animated blobs.

Your turn to make some noise

That was quite a journey. Motion, textures, fields, particle systems and displacement—noise can do it all. It truly is the workhorse of the creative coding world.

So obviously, you want to play with noise 😁

I’ve put together a little starter CodePen for you. It spins up a grid of noise and maps it to an array of glyphs. Just start by modifying the array and see how far you can take it.

Or if you’re looking for something more advanced, check out noisedeck.app. It’s like a synthesizer but for visuals.